Approximately one-fourth of Northern Community Mediation’s (NCM) funding comes from the State Court Administrative Office (SCAO), and half comes from Charlevoix and Emmet counties and their courts. The other 25% is raised by NCM.

On Monday, October 9, 2017, Northern Community Mediation (NCM) held its second annual Theatre Party in Charlevoix, Michigan. From 5:30pm to 6:45pm, attendees were able to enjoy appetizers that are sufficient to constitute dinner at East Park Tavern.

Then, at 6:45pm everyone went to the Charlevoix Cinema and was able to choose seeing one of three movies showing at the theatre. All of this was for the low price of $25 per person. Quite a deal!

The 2018 Third Annual Theatre Party in Charlevoix has already been scheduled for Monday, October 8.

For more information or tickets, contact Dr. Jane Millar at 231.487.1771 or e-mail jane@northernmediation.org 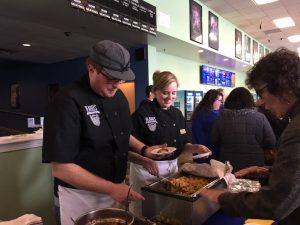 NCM prides itself on the fact that attendance at its Theatre Party is one of the best deals in town because tickets cost only $25 per person, which includes all the food you can eat, non-alcoholic beverages, door prizes, and a movie of your choice.

Next year’s theatre party will be held on Monday, March 11, 2019 at the Petoskey Cinema. For more information or tickets, contact Dr. Jane Millar at 231.487.1771 or e-mail jane@northernmediation.org

Each year, Northern Community Mediation (NCM) initiates a donor campaign. It is done through a letter of solicitation that highlights the impact mediation has had in a particular case. The 2017 letter focused two estranged sisters. Through mediation, they realized that having a positive relationship with each other was more important than their hostilities towards one another, especially since they were not even certain when their feelings towards one another disintegrated.

Northern Community Mediation does not charge for the following types of cases:

For all other types of cases, there is a minimal charge, which is waived for those individuals for whom payment would be a hardship. Consequently, NCM has a certain degree of dependency upon receiving donations. NCM is a non-profit, 501 (c) (3) organization. NCM’s federal ID number is 38-3161108. To make a tax deductible contribution to NCM, contact Dr. Jane Millar at 231.487.1771 or Email Jane