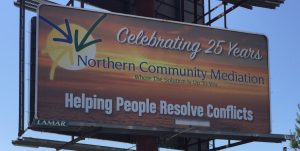 In October 2018, Northern Community Mediation (NCM) officially had been offering its services to the citizens of Charlevoix and Emmt counties for 25 years. In anticipation of that momentous occasion, NCM began a year-long celebration in November 2017.

The celebration began by the NCM staff writing personal, hand-written thank you notes to over 350 people and/or organizations who have been supportive of NCM over the years. During the month of December, NCM displayed a peace banner in eight of the local libraries: Boyne City, Charlevoix, East Jordan, Harbor Springs, Pellston, Petoskey, and Walloon Lake. NCM also made its annual, holiday party for its mediators, board members and staff extra special.

In February, NCM staff put together little packages of candy and personally delivered the candy to the attorneys and court personnel with whom NCM interacts on a regular basis. It is their support and cooperation that contributes to the success of NCM.

On May 15, NCM hosted its 25th anniversary party at City Park Grill in Petoskey. Approximately 75 people joined in on the celebration. From May 25 through June 24, NCM was highlighted on Lite 96.3. This was followed by a billboard ad near the Bay Harbor entrance from July 16 through August 12. Then, beginning on August 17, NCM was in the Circles of Kindness spotlight on TV 7&4.

Throughout the year-long celebration, NCM used events in which it participates annually to draw attention to its 25th anniversary. The list included

All in all, it was a wonderful year of showing gratitude to the community, marketing the services of NCM and having a wonderful time doing so.