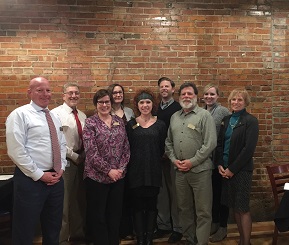 On Monday, February 8, 2021, Northern Community Mediation (NCM) held its annual Board Retreat from 5:00pm to 8:00pm via Zoom. President Bob Banner welcomed new board members Phil Harmon  Brooke Jacobi and Suzi Kanine, which was followed by a review of the Mission and Vision Statements, as well as a reflection on the 2020 year, which was a challenging one because of COVID-19.

Following the approval of the minutes from the Annual Meeting and the January Board  meeting, announcements were made. The Board members were then divided into four groups. Each group was then assigned two of the following eight questions:

The Board came back together as the whole and shared the dialog that they had had within their groups. Based upon the responses, the Board decided that there were four major areas on which to focus the strategic plan: staff compensation, funding, facilities and public awareness. Each Board member was assigned to one of the focus areas/committees. The committees will meet in the months in which the Board does not hold a meeting.

Since the Board Retreat was held virtually, there is no picture from the retreat. Therefore, the posted picture is from the 2020 Board Retreat.