Northern Community Mediation (NCM) celebrated its annual, Appreciation Gala on Thursday, May 28. Rather than its traditional, adult social gathering, however, this year’s event was held online via Zoom with over 30 people in attendance. Doug Van Epps, Director of the Office of Dispute Resolution, Michigan Supreme Court in Lansing shared the various ways in which the courts and the legal community in general are continuing to offer services in light of COVID-19. He stressed the important role mediation has played in that process. Van Epps lauded the contribution of NCM’s volunteer mediators and emphasized the fact that NCM is exemplary throughout the state of Michigan.

The Leah Award is one that is not necessarily given annually. It is reserved for an individual who has advocated for mediation over the years, has been supportive of NCM, and has promoted mediation creatively.

The 2019 recipients were as follows: 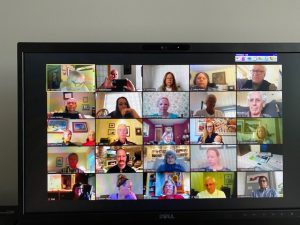 One of the desktop pictures of the attendees at the Appreciation Gala.